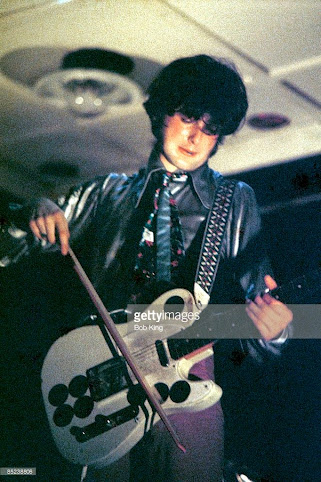 Jimmy Page, Sydney Stadium, 21 -23 January 1967. With Fender Telecaster and violin bow. Photograph: Bob King. "In early 1967, we played an Australasian tour with the Walker Brothers,  featuring Scott Walker, and at the rop of the bill was the late, great Roy Orbison. What an honour it was to hear Roy Orbison every night. Clive Coulson, who later became Led Zeppelin' s road manager,  was a singer in the band [The Mods] that supported us in Auckland (Page 2020)." The Yardbirds made their one and only visit to Australia and New Zealand early in 1967 as part of a triple-headline package tour called The Big Show which featured Roy Orbison and the Walker Brothers, plus various Australian and New Zealand support acts such as Johnny Young, Jeff St. John and the Id, Thursday's Children, the Mixtures, Phil Jones and the Unknown Blues, Bev Harrell & the Third Party, and Larry's Rebels. A planned follow-up tour mid' 1968 never took place as the group disbanded
16 comments
Read more